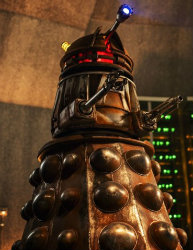 So essentially Chibbers can pull something more or less watchable out of the bag, but only on special occasions.

"Resolution" by Chris Chibnall, directed by Wayne Yip. Spoilers after the cut.

The return of Toothy McToothface 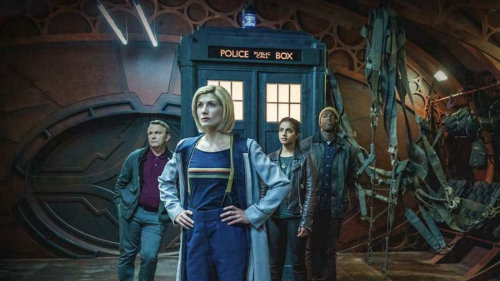 Of course, "kolos" is Greek for "arse," so at least it's nice that Chibbers has come round to agreeing with me about his writing.

"The Battle of Ranskoor Av Kolos" by Chris Chibnall, directed by Jamie Childs. Spoilers after the cut. 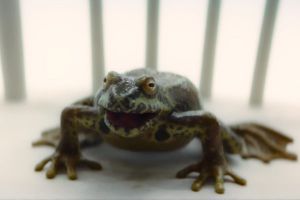 "This is so weird," I thought to myself several times, before we got to the CGI frog with the voice of Sharon D. Clarke waving the Doctor away.

"It Takes You Away" by Ed Hime, directed by Jamie Childs. Spoilers after the cut. 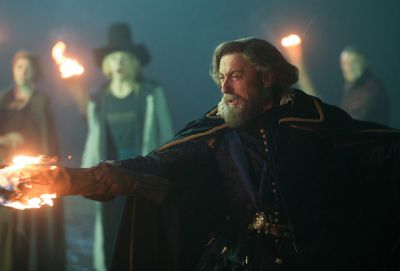 "The Witchfinders" by Joy Wilkinson, directed by Sallie Aprahamian. Spoilers after the cut. 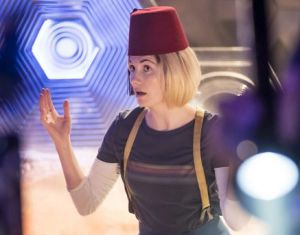 This week's episode of Doctor Who really made you sit back and think about people working in terrible jobs. Those poor actors, having to share a set with Bradley Walsh and Lee Mack at the same time!

"Kerblam!" by Pete McTighe, directed by Jennifer Perrott. Spoilers after the cut. 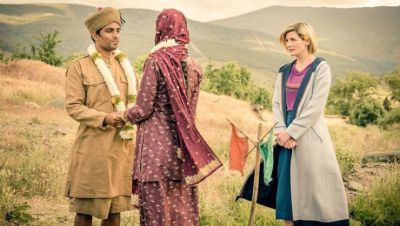 I guess the real Demons of the Punjab were the friends we made along the way.

"Demons of the Punjab" by Vinay Patel, directed by Jamie Childs. Spoilers after the cut. 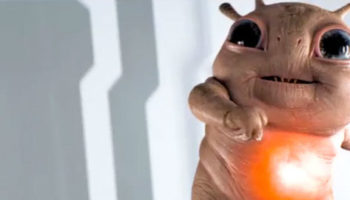 "The Tsuranga Conundrum" by Chris Chibnallbloody hell another one? That's half the series now and he's bound to write the finale and New Year special as well. Even Rusty Davies had let a couple of other people have a go by this point, although admittedly he completely rewrote anything with anyone else's name on it anyway, but even so, all Chibbers has done so far is graciously allow Malorie Blackman to share a credit with him on one episode.

Directed by Jennifer Perrott. Spoilers after the cut. 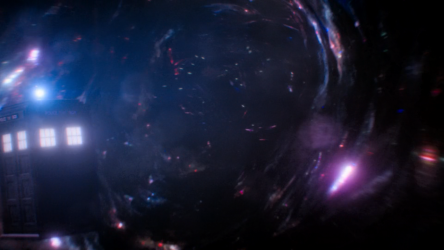 I've seen a few places say what a clever pun on Anarchy in the UK the title "Arachnids in the UK" is, which is handy because if it hadn't been pointed out to me I'd never have realised it was clever, I'd have thought it was really reaching for a weak pun that didn't quite work. And let's face it, if there's one thing I know about, it's weak puns that don't quite work.

"Arachnids in the UK" by Chris Chibnall, directed by Sallie Aprahamian. Spoilers after the cut. 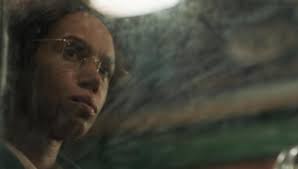 Wow, the people of Montgomery, Alabama were really committed to their racism, weren't they?

"Rosa" by Malorie Blackman and Chris Chibnall, directed by Mark Tonderai. Spoilers after the cut.

Thank you for smoking 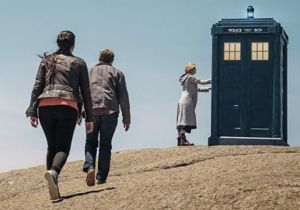 Ah, yeah. This is... Kinda more what I was expecting from a Chris Chibnall episode.

"The Ghost Monument" by Chris Chibnall, directed by Mark Tonderai. Spoilers after the cut.

Lots of planets have a Hoodezfield 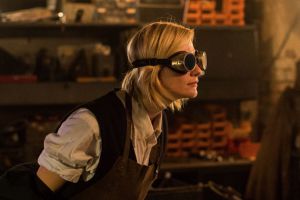 Well, so far I like Jodie Whittaker's Thirteenth Doctor. But then, she was never the one I was worried about, was she?

"The Woman Who Fell to Earth" by Chris Chibnall, directed by Jamie Childs. Spoilers after the cut. 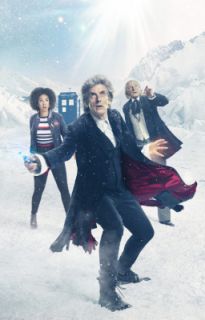 I've kind of forgotten about this secondary blog, to the point of never even having got round to writing about last Christmas' Doctor Who special, which climaxed in Peter Capaldi's regeneration into Jodie Whittaker. But it's nearly time for Whittaker's first series proper, so I watched "Twice Upon a Time" again to see if I was more inspired to write about it.

"Twice Upon a Time" by Steven Moffat, directed by Rachel Talalay. Spoilers after the cut. 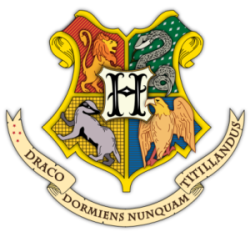 Time to update my list of Harry Potter film actors seen on stage again, something I'd planned to do last year when I was hoping to catch John Hurt in The Entertainer; sadly he had to drop out due to illness, which turned out to be fatal, and of course Alan Rickman has also sadly become unavailable to collect since I last updated this list.

I've only added four new names in the last two years, but with Shirley Henderson and Evanna Lynch within a couple of weeks of each other it seemed as good a time as any. Harry Melling has increased his lead as the Potter actor I've seen on stage most times - which just goes to show how much theatre he does, considering I collected my first two cast members (Sophie Thompson and Mark Williams in the same production of As You Like It) in the year he was born.

I'm using the Wikipedia cast list, which also includes actors whose entire performance ended up on the cutting room floor. I've linked to my reviews of the shows where possible; any title that isn't a link means it's from before I started reviewing online.

Is the future all-girl? 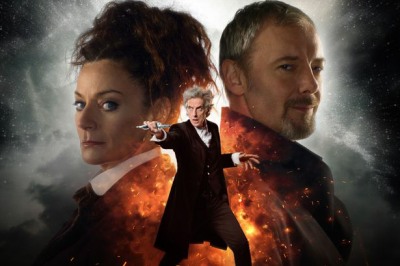 It always seems to take me ages to get round to blogging about the Doctor Who season finale, but at least this time I can make it coincide with the BBC's announcement that Jodie Whittaker will be the 13th Doctor.

"World Enough and Time" / "The Docto Falls" by Steven Moffat, directed by Rachel Talalay. Spoilers after the cut.

I have a feeling I already knew that Rona Munro had written a Doctor Who episode this series but had forgotten, so I got to get excited again when I saw her name pop up in the credits for this week’s episode.

“The Eaters of Light” by Rona Munro, directed by Charles Palmer. Spoilers after the cut. 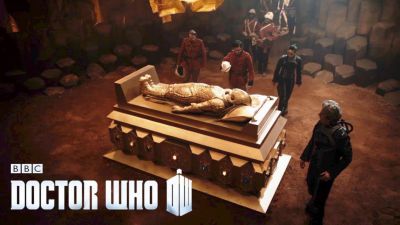 Now on BBC1 we're going to the poles. No, not those kinds of polls." TOO SOON, BBC CONTINUITY ANNOUNCER, TOO SOON!

"Empress of Mars" by Mark Gatiss, directed by Wayne Yip. Spoilers after the cut. 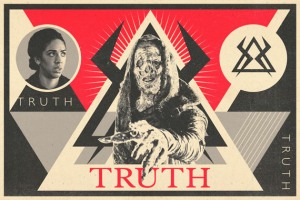 When looking for a new Doctor Who showrunner, I wonder if the BBC considered someone who’s now written a number of episodes, created and run his own fantasy series for five years – including the need to replace the entire cast at one point, which is… kinda relevant experience for Doctor Who - and been so successful his show was bought to be remade in the US? Nah, they probably just went straight to Chibnall, didn’t they?

“The Lie of the Land” by Toby Whithouse, directed by Wayne Yip. Spoilers after the cut. 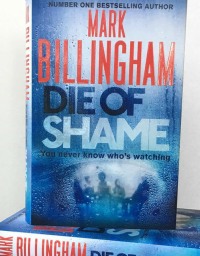 The latest Mark Billingham standalone novel does, like the earlier ones, get his books' usual protagonist Tom Thorne to make a cameo appearance, but introduces a new DI, Nicola Tanner, to actually investigate this crime. This might be because it's a bit of a format-breaker, but then again one thing I like about Billingham as a crime writer is that he never really has a set format anyway. Die of Shame is centred around a counseling group for addicts - a variety of addictions, from drugs to alcohol to overeating, with an equally disparate collection of people. When one of them is murdered, Tanner is convinced the killer comes from within the group. The book isn't really built around her investigation though, it mainly focuses on the group, alternating between flashbacks to before the murder and their reactions to it afterwards.

I liked the format a lot, although the solution to the crime is based on information we get very late in the day. And it's a bit unfortunate that, having introduced a lesbian detective, Billingham then has her fail to solve the crime, the implication being that Thorne comes in at the end and handles it (the reader still gets to find out whodunnit of course, through one of the flashbacks.) I think this story crosses over with the next Thorne novel, which will probably be the better for having that background, but Die of Shame itself is one I enjoyed with some reservations. 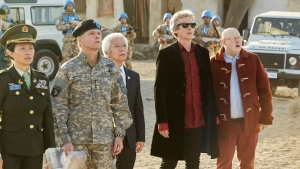 So Steven Moffat has delivered a three-parter by stealth, something he's apparently always wanted to do because it hasn't been done before (so did I imagine that that's exactly how they introduced the Derek Jacobi / John Simm Master at the end of Series 3?)

"The Pyramid at the End of the World" by Peter Harness and Steven Moffat, directed by Daniel Nettheim. Spoilers after the cut.

Doctor and the Medici 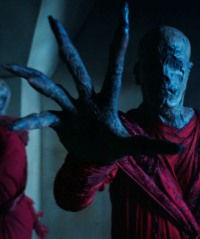 Back when we knew Doctor Who was getting relaunched in 2005 but we didn't really have any more details than that, people did speculate a bit over whether Russell T. Davies would keep it a family show as it had originally been, or if he was going to go for a "darker and edgier" reboot - the Battlestar Galactica model.

"Extremis" by Steven Moffat, directed by Daniel Nettheim. Spoilers after the cut.